Madness grips the airwaves like a deafening transmission, and the overlords of the earth seem to speak in terrifyingly grim visions. Thank the gods that every age produces its own soothsayers. It is fitting, then, that just as a surreal state of affairs takes hold, David Lynch returned to us with Twin Peaks: The Return, a continuation of his landmark cult 1990s series that combined melodrama with the director’s brand of surrealist imaginings. But not only did Lynch return, he also shows himself to be fully in tune with these new dark ages. Episode 8 of the revival in particular goes beyond television or even cinema — it is one mad flow about our civilization’s communion with dark forces to unleash absolute destruction.

Lynch is the quintessential American surrealist, who along with Alejandro Jodorowsky, is one of the last true keepers of the flame of that hallucinatory, anarchic moment where art and dream combined to expose the world. Newer talents like Greece’s Yorgos Lanthimos (The Lobster, Killing of a Sacred Deer) retain the essence of surrealism, but it is masters like Lynch who provide a window into where we come from, and where we are going.

The entire Twin Peaks revival has been a chance for Lynch to fully indulge — through the freedom of cable television — in the obsessions, nightmares and visions that have fueled his work since that classic 1977 debut Eraserhead. Yet this new Twin Peaks is also closer to Lynch’s cinema where the dark, bloody heart of Americana erupts in murderous dreamscapes such as Blue Velvet, Lost Highway and Mulholland Drive. In particular Episode 8 of Twin Peaks: The Return pushes further than even those movies, revealing a filmmaker attuned to the concerns of his species.

Episode 8 takes a detour from the show’s overall narrative involving FBI agent Dale Cooper (Kyle MacLachlan) escaping his fate from the original series and returning to the world of Twin Peaks, that melodramatic, candy-colored microcosm of American madness veiled by American pop, where the murder of one Laura Palmer seems to encompass all that is haunted and sick about the town and our society. Early in the episode, Cooper’s doppleganger, Mr. C, is shot down and left in the desert as ghostly figures, known as Woodsmen, spectrally appear and consume him. Lynch then cuts to black and transports the narrative back in time to July 16, 1945.

If you have not indulged in Twin Peaks: The Return (you should, as it is now complete and available for streaming), and are scratching your head at terms like “doppelganger,” or names like “Mr. C,” when the screen goes dark it doesn’t matter, because what follows is Lynch abandoning the narrative and letting his imagination run wild with visions and nightmares that cast a powerful shadow eerie in its familiarity. Before the key section of the episode begins, Nine Inch Nails appear on stage with Trent Reznor chanting a lamentation for a diseased world: “Spread the infection where you spill your seed.”

A black and white desert landscape fills the frame and suddenly a blinding mandala of light erupts. The Trinity Test, the world’s first taste of the atom bomb is transformed into a captivating shot in which the camera slowly moves towards the mushroom cloud itself. The sequence is scored by Krysztof Penderecki’s harrowing “Threnody to the Victims of Hiroshima,” which is a composition fittingly unsettling and fraught with a sense of spectacular doom. Unlike any previous take on this seminal event, Lynch ventures into the nuclear explosion itself, capturing the viewer in a cocoon of cascading atoms and the thunder of radiated annihilation.

In this sequence Lynch evokes the atomic bomb like never before, as an almost organic entity, breathing fire like some deformed dragon that marks a clear divide in the history of humanity. Before World War II humans waged war in more or less conventional forms, as armies meeting on battlefields and later in the air. But after 1945 we had reached a new moment, one in which we could provoke our own extinction. “I am become death, the destroyer of worlds,” thought Robert J. Oppenheimer as he watched that first, terrifying illumination in New Mexico. Lynch’s power of perception as an artist is on the mark — his opus arrives just as the world again cowers under the fear of atomic war.

Mere months after Episode 8 aired our maximum chief would proclaim before the United Nations that he would “destroy” North Korea, provoking their own overlord to threaten testing a hydrogen bomb over the Pacific. Suddenly what seemed as a past memory — atomic testing – once again feels immediate, and what a year ago would sound like dystopia out of a movie like On the Beach becomes plausible. Lynch films the nuclear blast as memory and surreal evocation. It is a moment from the past, but when he pans into its burning core it becomes something alive. What looks like a rural gas station is illuminated in jarring flashes, with the jagged appearance of figures within its outer and inner layers, and we imagine the ground level view of nuclear Armageddon.

Episode 8 is Dadaist filmmaking: a wild destruction of language and method to create pure expression. Like the Dada artists who communed around Hugo Ball in Zurich soon after the inferno of World War I, Lynch dismisses the rational approach towards filmmaking technique, instead creating a primal scream more apt for this primitive moment we inhabit. The Dadaists, and the Surrealists after them, were the offspring of a world that had gone deranged, conjuring new terrors like chemical weapons like some gothic séance. Ball’s diary entries from just before the war, collected in the beautiful volume Flight out of Time, feature reflections straight out of 2017: “Life is completely confined and shackled. A kind of economic fatalism prevails. Each individual, whether he resists or not, is assigned a specific role and with it his interests and character.” Lynch continues the tradition of shredding such a condition with his lens. 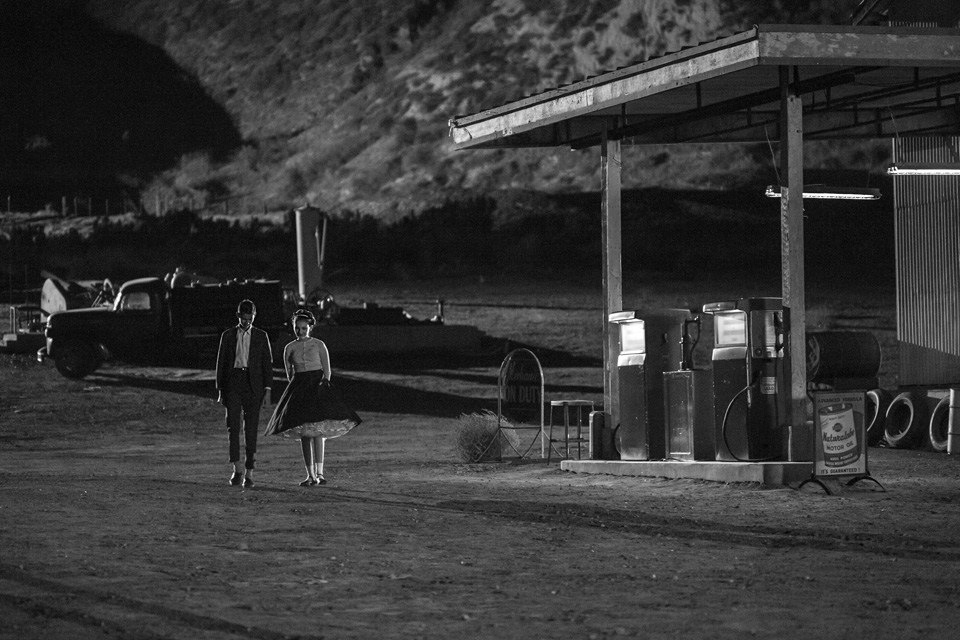 The episode’s second half takes place in 1956 in the New Mexico desert, where like in Blue Velvet, Lynch presents an American landscape where innocence masks terrors. An egg in the desert hatches, a frog-like creature with wings gestates. A young couple played, by Tikaeni Faircrest and Xolo Mariduena, stroll in total chastity through town, speaking in naïve verses. “Oh look, I found a penny! And it’s heads up, that means it’s good luck,” says the girl. The boy asks for a kiss, a waitress sweeps the counter of an empty diner as The Platters play on the radio. The black and white photography is as elegant and dreamy as Charles Laughton’s The Night of the Hunter, but like the cinema of Luis Bunuel, elegant images of domestic bliss are mere portents for subconscious specters to come.

It is in this section where Lynch brings the episode to a quiet yet bloody crescendo. A Woodsman, one of the show’s walking specters and representation of dark forces, walks into town and crushes the skull of the radio station’s receptionist, kills the night DJ and begins to utter into the mic, “This is the water and this is the well. Drink full and descend. The horse is the white of the eyes and dark within.” Blissful 1950s America as interrupted by carnage, because that pristine Norman Rockwell land was always a dream. Even after the end of the Cold War, we thought we were safe, but like the Woodsman, history has interrupted us time and time again with jarring transmissions. If the Woodsman’s dialogue is cryptic it is because Lynch uses language to tap into moods, in the same way a melody will capture a moment better than plain, direct dialogue. “Thought is made in the mouth,” once said the Dadaist Tristan Tzara, at a time between world wars when traditional tomes and phrases lost all meaning to a generation, as today traditional labels and political slogans suddenly feel dead or hollow.

As the Woodsman chants, the town’s inhabitants who listen to the radio pass out, including the young girl, now in her room. “Language is a virus from outer space,” warned William S. Burroughs. The egg-spawned creature from earlier descends into the room, nestling itself in her mouth. In the tradition of classic surrealism, Lynch takes a beautifully conservative image and distorts it. The all-American girl now incubates a creature, beneath beauty lie disturbing truths. This is akin to a severed ear found by a white picket fence neighborhood in the opening of Blue Velvet, where postcard America hides madness.

Episode 8 is a Lynchian dream of an imperial society gone insane. The birth of the atom bomb and its subsequent use on Hiroshima and Nagasaki inaugurated an age where history and dreamscapes merged, as they do through Lynch’s art — historical and political developments now make the truly apocalyptic imaginable. How many of us do not find ourselves in eerie or terrible daydreams when reading headlines concerning this president’s tweets aimed at the Korean peninsula? Hasn’t this last year, more than most, barged into the American consciousness like the Woodsman?

Like his artistic ancestors, Lynch weaves a collection of images and sounds that evoke rather than just say. His mushroom cloud is like a poem to our drive towards cataclysm, evoking Walter Benjamin’s Angelus Novus from his Theses on the Philosophy of History, inspired by a Paul Klee painting. Benjamin imagines an angel, “His face is turned toward the past. Where we perceive a chain of events, he sees one single catastrophe which keeps piling wreckage upon wreckage and hurls it in front of his feet.” A storm blows in from paradise — or the nuclear eruption Lynch has evoked — “The storm irresistibly propels him into the future to which his back his turned, while the pile of debris before him grows skyward. The storm is what we call progress.”

Lynch has now brought to television that crystalline eye that captures us all, a vision that conjures dreams, storms and darkest poetry.

Alci Rengifo is a freelance writer based in Los Angeles. He frequently contributes to the Los Angeles Review of Books and the East LA monthly Brooklyn & Boyle.
♠