For his ninth (and possibly penultimate) film, Quentin Tarantino takes audiences back to the summer of 1969, where Hollywood was swinging and hippies seemed a harmless subculture. That is until the Manson Family murdered Sharon Tate and her friends in her mansion on Cielo Drive. Blending fact with lots of fiction, Once Upon a Time in Hollywood re-imagines this time as the fairytale its title suggests. But instead of white knights and princes, Tarantino offers stuntmen and TV cowboys. Instead of castles and lavish balls, he presents a celebrity-stuffed party at the Playboy mansion. Instead of an evil sorcerer or monster horde, there’s Charles Manson and his minions. And instead of a princess as a damsel in distress, Tarantino presents an enchanting ingénue who was killed in her prime.

Written and directed by Tarantino, Once Upon a Time in Hollywood centers on fading star Rick Dalton (Leonardo DiCaprio) and his loyal stuntman Cliff Booth (Brad Pitt), who is “more than a brother, a little less than a wife” to the borderline has-been. Once the headliner of the TV Western “Bounty Law,” Rick is now scraping by on guest spots and fears his best days are behind him. This pushes him to heavy drinking and tearful public outbursts. But Cliff is ever by his side with whatever Rick needs, be it a kind word, a cigarette, or a driver. Cliff doesn’t think about the future, for better or worse. He’s an impulsive and confident man, who has little patience for the arrogance of others. Which leads him into outrageous scenarios on TV shoots or on the infamous Spahn Ranch. 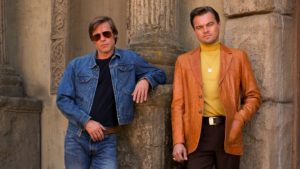 When the film is focusing on these two, it’s Tarantino in his groove. Cliff is familiar Tarantino anti-hero, a tough guy with a dark past and a cool exterior, this time decked in a Hawaiian shirt that covers an array of unexplained yet telling scars. Rick is Cliff’s garrulous and charismatic partner, who’ll play the fool and win laughs, but can turn on a sense of menace when needed. In a sequence involving this fictional actor appearing on the actual Western series Lancer, DiCaprio shifts gears with a breathtaking exuberance. One moment, Rick is having a fantastic freak out in his trailer, smashing things and berating himself for flubbing his lines. The next, he’s back on set, collected and convincingly playing the “heavy” with a snarl so ferocious you might wish Tarantino would show how this TV episode plays out. DiCaprio holds nothing back, giving a performance that’s reminiscent of his manic energy and comic lunacy in The Wolf of Wall Street. Still, Pitt stealthily steals this movie away from him.

While Rick is all frenzy, Cliff is ever chill, yet never boring. Pitt drops the cocky swagger he carried off in Fight Club, Ocean’s Eleven, and Inglourious Basterds, and settles into a cooler confidence. Cliff is a hanger-on with a criminal past and no future. He lives in a dirt lot, in a battered trailer with — an admittedly adorable — pitbull named Brandy. And he’s not concerned what anyone thinks about him, which makes him not only a fantastic foil to the image-obsessed Rick but also an unpredictable and dangerous individual. While Rick is on set, the film follows Cliff around on errands. Whether it’s fixing an antenna or driving Rick’s car around Los Angeles, Pitt makes each moment riveting, because anything feels possible. 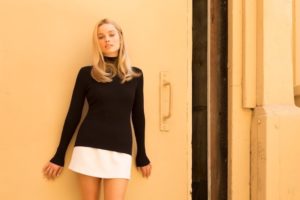 If this were a film solely about these deeply flawed figures of Hollywood fame and misfortune, I might have loved Once Upon a Time in Hollywood. But the other half of the film made me too uneasy to laugh at Tarantino’s playful skewering of La La Land. See, Rick and Cliff’s story is paralleled with Sharon Tate’s. So, the Manson murders loom large over even the zaniest shenanigans. While the boys are jockeying for work or getting into trouble, Sharon (Margot Robbie) is buying a book for her husband, Roman Polanski. She’s going to a party with her dear friend Jay Sebring. Or she’s going to the movies to see how the audience reacts to her performance as “the klutz” in espionage-comedy The Wrecking Crew. Sharon isn’t given an arc or a plotline. She’s just living her life, blithely unaware of the title cards brandishing dates that are counting down to the day of her murder.

Robbie is radiant as Tate. Tarantino’s script gives her plenty of opportunity to portray this rising ingénue as enthusiastic, thoughtful, warm, and the life of the party. The sequence where Sharon watches her own movie is deeply charming. But regrettably, she doesn’t get much in the way of complexity. While Cliff and Rick are complicated figures, Sharon is sunshine in a mini-skirt. Instead of a fleshed-out character, she comes off chiefly as a symbol for innocence. Of course, Tate was blameless for the horrific homicide that befell her because of the whim of a madman. But this would be true even if she wasn’t presented as a picture-perfect blond bombshell who was ever ready with a smile and chipper small talk. Tarantino has created a slew of characters — both male and female — that boast both virtues and vices. Why not give such complexity to Sharon? I suspect his shiny portrait of Tate was meant as sincere and respectful. But it comes off as shallow when compared to the male leads. And the film’s conclusion does nothing to change this.

Likewise grating are Tarantino’s indulgences, which range from distracting to outright laughable. Some are minor, like a title card that leaps from warranted time/place information to point out some celebrity spottings that might otherwise be missed. It’s not important to know that Michelle Phillips of The Mamas and the Papas was at the Playboy mansion party. Yet here’s a title card to inform you anyway! More intrusive is the haphazard voiceover narration provided by Kurt Russell, who pulls double duty as he appears in the film as a stunt coordinator. What connection does that character have to this narration? That’s unclear. And the device is not used throughout or as a bookend. Instead, it jumps in mid-way through act one to give some backstory on Cliff and Rick. Then the voiceover vanishes for maybe two hours, only to abruptly reappear to provide a bunch of exposition as the story leaps from February to August. It’s sloppy storytelling, even when the insights provided are crucial. But Tarantino isn’t much for subtlety. And he’s shoving that in our face with Once Upon a Time in Hollywood’s focus on female feet. Repeatedly, women’s bare, dirty feet are placed in frame of actress close-ups, sometimes in competition with the performer’s face. And the guffaws these shots sparked suggest his reported fetish is pulling focus from his actress’s performances. 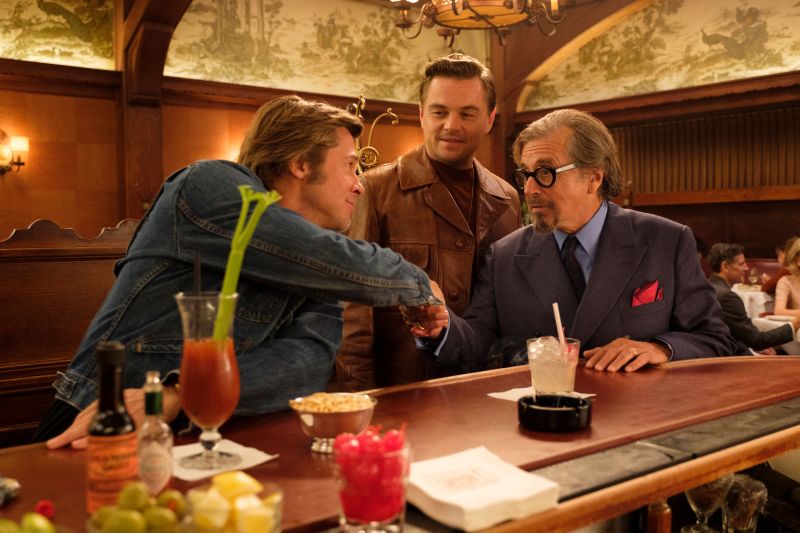 Nonetheless, there is much to relish in Tarantino’s latest. The sections about the absurdity and vulnerability of filmmaking (or TV making) are fascinating and fun. Child actor Julia Butters proves a surprising and sensational match for DiCaprio in one standout scene of craft talk and bittersweet realizations. And Pitt meets his match too. Quirky ingénue Margaret Qualley brings a madcap yet alluring moxie to a pickle-loving, face-making Manson Girl who takes Cliff for a wild ride. Then, die-hards fans will whoop in giddy recognition as recurring Tarantino players like Kurt Russell, Zoë Bell, and Michael Madsen, pop by in bit parts. And anyone awed by Hollywood might be rightly dazzled by the astounding ensemble cast that includes Al Pacino, Dakota Fanning, Luke Perry, Timothy Olyphant, Damian Lewis, Bruce Dern, Scoot McNairy, Lena Dunham, and Stranger Things 3’s scene-stealer Maya Hawke. But be warned: the climax is only for those who crave ultra-violence with graphic gore and a uniquely Tarantino spin.

In the end, I understand why the audience around me was whooping in delight, gasping in excitement, and cackling hard at Once Upon a Time in Hollywood. Tarantino has packed its nearly three-hour runtime with nostalgia, comedy, and cinephile Easter Eggs. But I couldn’t connect to that. For me, even all the lightness and fantasy he brings to the summer of ’69 is not enough to push away the real-life darkness that descended on Cielo Drive.

Once Upon a Time in Hollywood opens July 26.

Kristy Puchko is Film Critic at Riot Material Magazine. Ms. Puchko (@KristyPuchko) is a New York-based film critic and entertainment journalist, her work has appeared in Vanity Fair, IndieWire, Nerdist, and Pajiba (to name a few). Ms. Puchko is a regular contributor on the Slashfilmcast, and teaches a course on film criticism at FIT. To see more of her work, visit DecadentCriminals.com