From two concurrent exhibitions:
Clothes Make The Man: Works from 1990-1994, at Mary Boone Gallery
2017: The Mess and Some New, at Salon 94, NYC
Reviewed by Phoebe Hoban

We live in the age of the avatar, and over the course of several decades, Laurie Simmons has proven herself to be the ultimate avatar artist for our age. (Think of her shocking 2015 “The Love Doll” series: sophisticated Japanese sex toys beautifully chronicled in suburban household settings, like Dare Star’s classic 1950s character “The Lonely Doll.”)

Long before the Internet was all-pervasive, with its selfies, Instagrams and ubiquitous gaming, Simmons honed her art of using inanimate surrogates as stand-ins for human subjects. Back in the late 1970s, when Cindy Sherman was creating her iconic Untitled Film Stills, Simmons was on a parallel track, staging scenes of miniature plastic housewives in dollhouses.

Simmons played with larger dolls in the 1990s, cleverly dressing wide-eyed male resin models of actual Howdy-Doodyish ventriloquist dummies in vintage boys’ clothing and taking photographs of them in simulated situations. What did such boy-men fantasize about? Menage a trois? masculine muscles and derrieres? barbecued chicken?

Not for nothing are they called ‘dummies,’ and Simmons’ almost clinical dissection of their banal fantasies cruelly cuts them down to size. At the same time the show is presciently in lock-step with the “Me Too” movement culminating in the recent indictments of Bill Cosby and Harvey Weinstein for sex crimes. (The dummies were also actors in Simmons’ somewhat obscure 2006 film, “The Music of Regret,” which weirdly matched Meryl Streep, a friend of the artist, with the pint-sized characters, here depicted as potential philanderers and malefactors.) In the backroom of the gallery, a second series of photographs, “Walking & Lying Objects” (1991) gives legs to an anthropomorphized hotdog, tomato, and doughnut, among other foodstuffs, and prefigures similar images in the film, which features such inanimate objects as a clock and a dollhouse dancing on limber legs. 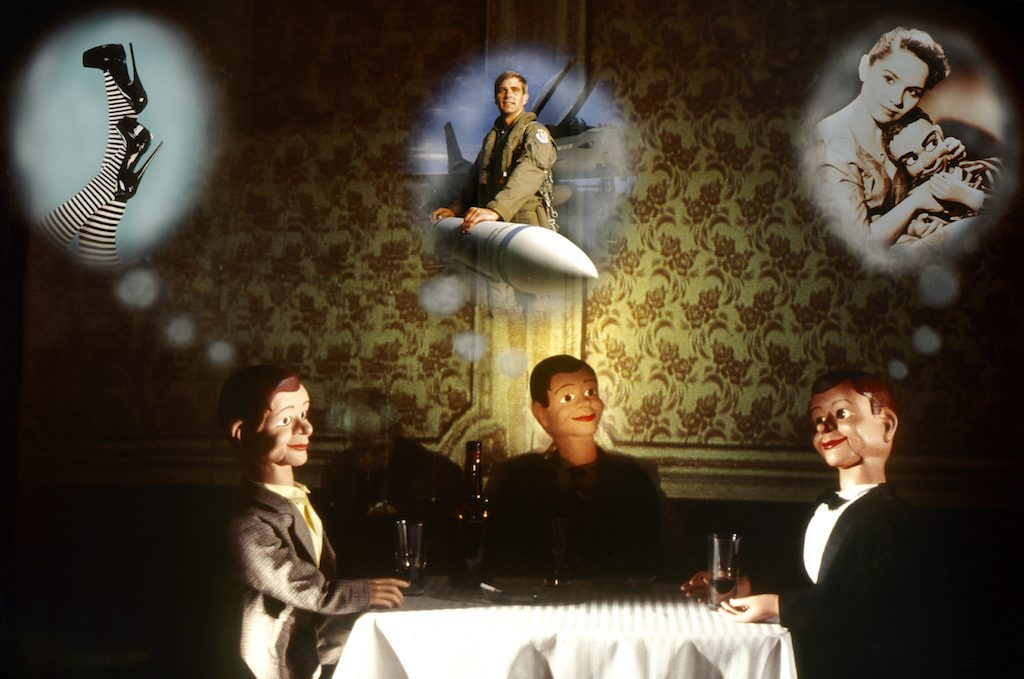 In a double-exhibit whammy, Simmons’ simultaneous show at Salon 94, The Mess and Some New, the artist gets up close and pseudo-personal. The  series of portraits of women in both real and body-painted clothes includes remarkable images of her two daughters, Lena and Grace Dunham, as well as a wall-length mural of a color-coordinated sea of plastic detritus–much of it, ironically, of cleaning products–fittingly entitled, The Mess, 2017.

The “Some New” portion of the show features Lena (Pink) dressed as Audrey Hepburn curled in a chair as she chats on the phone, and Grace (Orange) in jacket and sideburns as Rudolph Valentino. Other models include a transgender beauty in blue, Hannah (Aqua) two subjects sporting ornate painted-on jewelry, Andrianna (Red), and Shirin (Yellow), and a lovey blonde, Hayden Dunham (White), in a beige turtleneck simulated sweater that clearly reveals her nipples. Payton for Harper’s Bazaar (Pink) is a hybrid of a model and amime clothed in painted-on couture, created for a series in the June/July 2018 issue of Harper’s Bazaar.

In its use of painted imagery on live models, (done according to Simmon’s specifications by a body of makeup artists) the show continues where Simmons’ last series, the 2014 “How We See/Look,” left off.  That featured fashion models with hyper-realistic but simulated eyes painted on their closed eyelids. Animes? Avatars? Laurie Simmons’ unique and disturbing photographic art eerily plays with the hyper-reality of our present day and near future, in which gender fluidity, virtual reality and the penchant for personal avatars push the Pygmalion myth into brand new territory.

Phoebe Hoban has written about culture and the arts for a variety of publications, including The New York Times, New York Magazine, The Wall Street Journal, Vogue, Vanity Fair, GQ, Harper’s Bazaar, ARTnews, and The New York Observer, among others. She is the author of three artist biographies: Basquiat: A Quick Killing in Art, (1998), published as an e-book in May, 2016; Alice Neel: The Art of Not Sitting Pretty, (2010) and Lucian Freud: Eyes Wide Open, (2014).

at University of Southern California, Fisher Museum of Art. (through 3 December 3, 2022) Reviewed by Margaret Lazzari Louise Bourgeois is widely recognized for her sculptures and installations, but Louise Bourgeois: What is The Shape of This Problem is a wonderful opportunity to immerse yourself in her perhaps-lesser-known prints, fabric work and writings. This exhibit contains over […]

Moonage Daydream Dir. Brett Morgan Reviewed by Nicholas Goldwin As one of the greatest shapeshifters in the expansive history of rock music, it seems only fitting that the documentary with David Bowie as its subject never seems content to express the trials, tribulations and artistic triumphs of Bowie in any one fixed way. This is […]

by Merve Emre NYR The essay form…bears some responsibility for the fact that bad essays tell stories about people instead of elucidating the matter at hand. —Theodor Adorno The personal essay is a genre that is difficult to define but easy to denounce. The offending element is rarely the essay as a form, but its […]

at Advocartsy, Los Angeles (thru 5 November 2022) Reviewed by Christopher Ian Lutz Fantasy requires a symbolic vehicle to transport a character from the real world into the imaginary realm, where the laws of reality are subverted or obscured to justify an otherwise absurd event. The artist might depict the vehicle as a real object […]

by Sue Halpern The Metaverse: And How It Will Revolutionize Everything by Matthew Ball Liveright 352pp., $18.89 NYR In October 2021, when Mark Zuckerberg announced that Facebook would now be called Meta and its business interests would be pivoting to the metaverse, there was almost universal confusion: most observers had no idea what he was […]

A wisdom transmission by Samaneri Jayasāra ﻿Excerpted from —  Advice from the Lotus Born  from the chapter “Pointing the Staff at the Old Man” Translated by Eric Pema Kunsang Rangjung Yeshe Publications, 184pp., $21.95 . .

at George Billis Gallery, Los Angeles (through 8 October 2022) Reviewed by Nancy Kay Turner “Things are not what they seem: nor are they otherwise.” –Buddha Margaret Lazzari’s luminous solo exhibition of paintings, entitled Breathing Space, were painted during the pandemic, and the exhibition title is indeed significant. It’s defined as a respite, a hiatus, or an […]

Mad God Dir. Phil Tippett Reviewed by Nicholas Goldwin Technically astonishing and immersive to a fault, director Phil Tippett successfully demonstrates that thirty years of relentless dedication to your craft can lead to cinematic innovations even his old stomping grounds – the sets of Star Wars and Jurassic Park – have yet to catch up. […]

Eve Wood: Hanging in There to Hang On at Track 16 Gallery, Los Angeles (opening reception: Saturday, September 10, 7-10pm) by Julie Adler I met Eve Wood at Holly Matter, an art gallery on Heliotrope in East Hollywood, 22 years ago now. I recall she got up and read some of her poems. Incisive, cutting, […]

Reviewed by Cintra Wilson The History of Bones: A Memoir by John Lurie Random House, 435 pp., $28.00 NYRB It was 1989 when I saw John Lurie on TV in a late-night advertisement for the new Lounge Lizards album, Voice of Chunk, which was “not available in stores” and selling exclusively through an 800 number. Operators were standing […]

at Daniel Cooney Fine Art, NYC (through July 29 2022) Reviewed by Phoebe Hoban The small scale of Donna Ferrato’s snapshot-like black-and-white photographs belies their personal and political power. Whether they document the medical sinks and shelves in a now-shuttered Texas abortion clinic, or hone in on the badly bruised face of a domestic violence […]

at the Buckland Museum of Witchcraft and Magick, Cleveland OH (through 30 September 2022) Curated by Stephen Romano Gallery Reviewed by Christopher Ian Lutz The extension of a lineage occurs not merely by the repetition of form, but by the intersection of conservation and revolution. Transformation is fundamental to preserving the essence of a given tradition’s rituals and […]

A Cadence for Redemption: Conversations With Abraham Lincoln by Eve Wood Del Sol Press, 46pp., $5.99 Employing the fictive voice of a former president, Eve Wood shifts the perspective on the happenings of our times – where all indicators point to the slow, inexorable collapse of the American Experiment – to the one man who […]