Vacation-starved New Yorkers could nonetheless repair to David Zwirner gallery this summer, on West 19th St. and view James Welling’s short film Seascape (2017). The film provides an ingratiating encounter with the storied, rock-festooned Maine coast, accompanied by an audio of accordion and taped ocean sound. There is no narration, just image, sound and elegiac music, as ocean waves endlessly and variously crash upon the rocks, the sun becomes clouded then bright again, and water and sky ever change hue. America “grew up” with landscape painting of the Romantic era, beginning effectively with Thomas Cole, and, continuing in the dramatic seascape narratives of the Maine coast by Winslow Homer. Welling’s film adds yet another iteration of aesthetic and method to this tradition 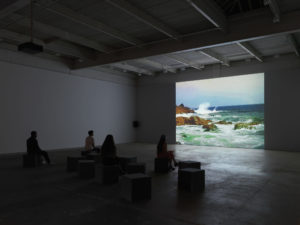 James Welling’s original filmic source was made in the early 1930s at Perkins Cove, Ogunquit, Maine, by his grandfather, Impressionist painter William C. Welling. The original black-and-white film was transformed by James Welling into a contemporary piece with sophisticated technology that included the making of a digital file, and application of digital coloring, including several Photoshop layers. The elder Welling’s original painting of this site served as source for the reconstructed film’s colors. The film’s musical score was composed by James’s brother, musician William B. Welling, employing, in addition to a 1940 “Gloria” accordion, the Foley effects of beach pebbles on drums.

Seascape is rather short, just over five minutes long, yet, in the darkened gallery with its large-format floor-to-ceiling projection and gritty audio, it feels considerably longer. The camera pans left and right, and eventually encounters the distant horizon. The aura of this film takes hold, the rhythm of waves and plangent accordion music become mesmeric, and short of some mystical astral projection, we are there, for a moment, at the ocean’s edge. At the film’s conclusion, the screen goes dark, yet the accordion plays on. The complexity of Seascape’s making, across time and technology remains significantly out-of-view, if not mind, and, given the film’s source, James Welling manages to avoid the trap of sentimentality here, bringing it to a laconic contemporaneity.

“From today, painting is dead,” French academic painter Paul Delaroche famously said, upon seeing a daguerreotype for the first time in ca. 1839. We have come to know that Delaroche was wrong, and in James Welling’s art (not to mention the work of many other experimental photographers), we experience an eye-perplexing yet fruitful dialogue among the medias painting, photography and film, often with ravishing result. The upending of media categories can be unsettling, but the aesthetic discoveries afforded, irresistible. 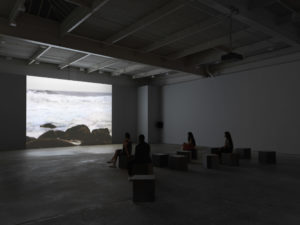 Across cultures and time, the ocean has come to signify many things. At very least, it represents disquiet before nature’s display of the elemental life-force. For Robert Lowell, in his poem “Near the Ocean,” it implies near-peril, and prescience of the Postmodern state of things:

Sleep, sleep. The ocean, grinding stones,
can only speak the present tense;
nothing will age, nothing will last,
or take corruption from the past.

Earlier, in “Dover Beach,” Matthew Arnold’s “grating roar” of stones and ocean form the backdrop for “confused alarms of struggle and flight,” and the clash of nocturnal armies. Time also enters into our idea of the ocean, as mysterious “force,” as continuous as the ocean’s waves, situating us inside and outside our histories. James Welling takes us to the ocean yet again. Its daunting power won’t cease speaking to us, its existential questions won’t let us alone.

Donald Lindeman majored in Art History at Colgate University, BA, 1974, and earned his MA in Art History, Columbia University, New York, 1976. From1993 to 2007, he was indexer and then Assistant Editor at Art Index, H.W. Wilson Co (metadata since sold to EBSCO). His MA thesis was “The Art of Paul Kleein Transition: 1918-1925.”