Since her 1996 duo set with Paul Bley on Something About Water (Libra), pianist-composer Satoko Fujii has led numerous groups in widely varied formats ranging from free jazz to avant-rock to new-music chamber works. The possessor of a most formidable set of playing chops, Fujii is an intellectually engaged and refreshingly progressive-minded musician whose idiosyncratically shaped and harmonized compositions have seen upwards of 80-plus releases on her and partner Natsuki Tamura’s Libra label (Tamura, who also goes by the name Kappa Maki, is on his own a beautifully unclichéd tone-warper with an equally brazen disregard for the hollow holys of his instrument). If you want a reference point for the kind of beyond-jazz musical freedom Fujii represents, you might think Carla Bley and Michael Mantler’s Jazz Composers Orchestra stuff of the early ‘70s.

In a match made in future-jazz heaven, the ever-prodigious Fujii and drummer Tatsuya Yoshida are Toh-Kichi. Their album’s title, Baikamo, translates roughly to Plum Algae. What the titles of their duo improvs/compositions mean is at this time shrouded in mystery, but I suspect it’s basically this: Because We Can.

The brief opening, “Gidubadhopen” (told ya), is a wild flurry of Fujii piano stabs and jolts, Yoshida’s drums flailing free like a particularly jolly octopus. There is an abrupt halt for a hint of something “lyrical,” but quickly we’re back to free thunderstorms of piano and drums, the piece then calming down, or soothing relatively the agitation; the initial brawny piano riff returns with the drums in a related near unison and, boom, the end.  The similarly free/structured “Rolling Down”’s repetitive piano ostinatos focuses on Fujii’s very strong left-hand work, a sage toughness that Yoshida’s drumming throughout matches in feral barks ’n’ bites.

It becomes apparent that what has been sketched out prior to the playing of these pieces is at least an idea, one of establishing a possibly new or alternative musical form, which is then developed or demolished in their spontaneous performances — it’s like carving a shape out of granite, or perhaps digging one’s way upward toward sunlight. Aided by its episodic shape, “Climber’s High” is stupendous unison playing, speedy key-slices that impart real drama and excitement in a sound like this (Fujii heats up the avant-garde). 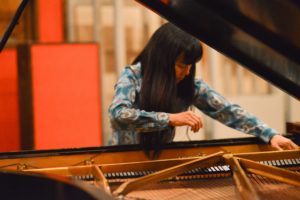 In “Walsjhechirfo” we witness a tightly controlled and utterly ambiguous frenzy, and the questions we might ask — and Fujii always likes to ask — are: How are the parts related? Do they have to be? “Huwebsjhoill” says maybe they do, maybe they don’t. While it starts quietly, ponderously, here soon come the percussive crash-bangs, the piano knifings, and let tonality be damned. She’s parroting Yoshida’s percussion blasts, and he’s responding to how she is responding to him. It’s not too much a stretch to say that this “call and response” approach, in which all players both cue and follow their musical mates, is distantly related to roots-jazz’s connection to earlier field-worker/slave songs, and it’s without a doubt the most consistent aspect of Fujii’s jazz-tenuous compositional approach.

“No Reflection” features another one of Fujii’s specialties, quite spooky realms created by plucking, stroking and swatting the strings of the piano by hand or with drumsticks or metal objects. The resulting effects are akin to dark waves, billowing clouds and the impending screech of ancient banshees. Here, each sweep of the strings leads the way into sprightly, jazzy stuff with melodic contours and Bud Powell chords. The piece becomes modern jazz-like, boppy, with odd time signatures in unison piano chords and sympathetic drums. As it fades, we’re reminded that it’s an excerpt from not quite an improvisation, more a spontaneous composition spawned from a predetermined set of melodies or thematic gambits.

“Ruvwsevjieck” finds Fujii further exploring the very sound of the piano, which is, lest we forget, a percussion instrument. The closing “Ice Age”’s ghostly voices are not credited here, but I assume it’s Fujii singing into the piano strings. It ends with overtoned piano jabs on the lowest keys. 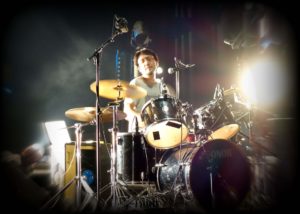 Other pieces concern themselves with dynamics and, always, elliptical, mutative shapes. The title track commences with a drum solo, rolling/clicking/clattering thunder. The piano is again “lyrical,” countering and somewhat tempering the drums.  “Laughing Birds” incorporates “free” sounds with composed lines and themes, which come together, break apart. “Ovgwebkwum” (you heard that right) is a spiky minefield, a vast sea of rabbit holes, corners to turn, alleyways to explore. “Front Line” is hi-NRG, at very least, though dauntless is more like it.

Cascades, waterfalls of piano and drums splashing together: While they decidedly give no quarter — this music is for Fujii and Yoshida themselves, and anyone who’d like to try to listen, and learn — significantly, theirs is a very modern music that is not painted in abstraction. Rather, these are combinations of realities such as perhaps have never been heard before. A music free of clichés, then, it provides deep chasms to tumble into, an upbeat, fearless, creative space for all concerned. And that is a good place to be.

John Payne is Riot Material’s Music Critic and Helmsman through the Avant-Garde. He also writes about music and film at publications including Mojo, The Quietus, Red Bulletin, Drum!, High Times and Bluefat. Mr. Payne is the former music editor of LA Weekly, and the author of the forthcoming official Diamanda Galás biography Homicidal Love Songsand editor/co-author of Jaki Liebezeit: The Life, Theory and Practice of a Master Drummer (Unbound, London).