“Dreamland,” Frank Romero’s sprawling (like Los Angeles itself), exuberant retrospective at the Museum of Latin American Art, is jam-packed with over 200 paintings, monotypes, mixed-media low-relief wall pieces and jazzy neon sculptures. Romero, a founding member of Los Four in 1974 with Carlos Almaraz, Gilbert “Magu” Lujan and Roberto “Berto” de la Roche, came of age artistically in that heady time when identity politics was being shaped. Groups underrepresented in the art world at that time -women, gays and lesbians, Chicanos – all separated into their respective tribes to develop and nurture art that both described and celebrated their unique experience.

The rich imagery that emerged from both Los Four (Romero, Almaraz, De La Roche, Lujan) and ASCO (Herron, Gamboa Jr., Valdez, Gronk) was characterized by an almost feverish and heightened color sensibility fueled by myth and folkloric cultural references. In some ways, it was the visual equivalent of the literary tradition of magic realism where dreamlike apparitions and imaginary events all seamlessly coexist with realistic situations.

The iconic painting entitled “The Closing Of Whittier Boulevard” (1984, oil on canvas, 96” x 144”) documents a real event that happened in the 1970’s when the police closed off Whittier Boulevard to all the low riders who regularly cruised it, in what was essentially a culturally provocative move. Though very political in nature, Romero’s representation of the police as stiff toy soldiers with an enigmatic Don Quixote-like figure on horseback surrounded by more than half a dozen low riders makes the point without being heavy handed. The night scene, emblazoned by the bright yellow headlights pointed at the police against the blood red street and neon signs, is instead theatrical and mysterious. Characterized by Romero’s seemingly spontaneous (in fact, he said in an interview in 2002, that this painting took him 10 years to make) gestural paint handling, vibrant color and cartoonish figures, this image delights as well as educates.

The Closing Of Whittier Boulevard

Romero did not shy away from other controversial subject matter. In 1996 he painted “The Arrest Of The Paleteros” (oil on canvas, 96” x 144”), an event that took place at Echo Park lake, a favorite haunt of both Almaraz and Romero. Paleteros were the ice cream vendors hawking their delicious homemade ice cream and the image, as painted, spoofs the police making them look rather ridiculous [as being an entirely ridiculous goon squad]. Three cop cars, 3 police in outlandish riot gear and 5 regular policeman harass 4 adults and 3 children (still holding ice cream in their hands), while another officer chases after the fleet-footed balloon man. It is almost dusk and the cars shine their headlight on the four hapless adults. The lushly painted pinkish-yellowish-turquoise reflections of the lake behind them are splendid. Paradoxically, Romero’s unique paint handling is very precise although it looks so carefree. He delineates the multiple reflections with exacting parallel lines. Compositionally, everything in the bottom right is darker, more menacing (in a friendly Frank Romero way) than the tropical urban paradise behind them. The gritty reality of police harassing the patrons of the park, who perhaps sell their ware without licenses, is here handled with humor and grace. 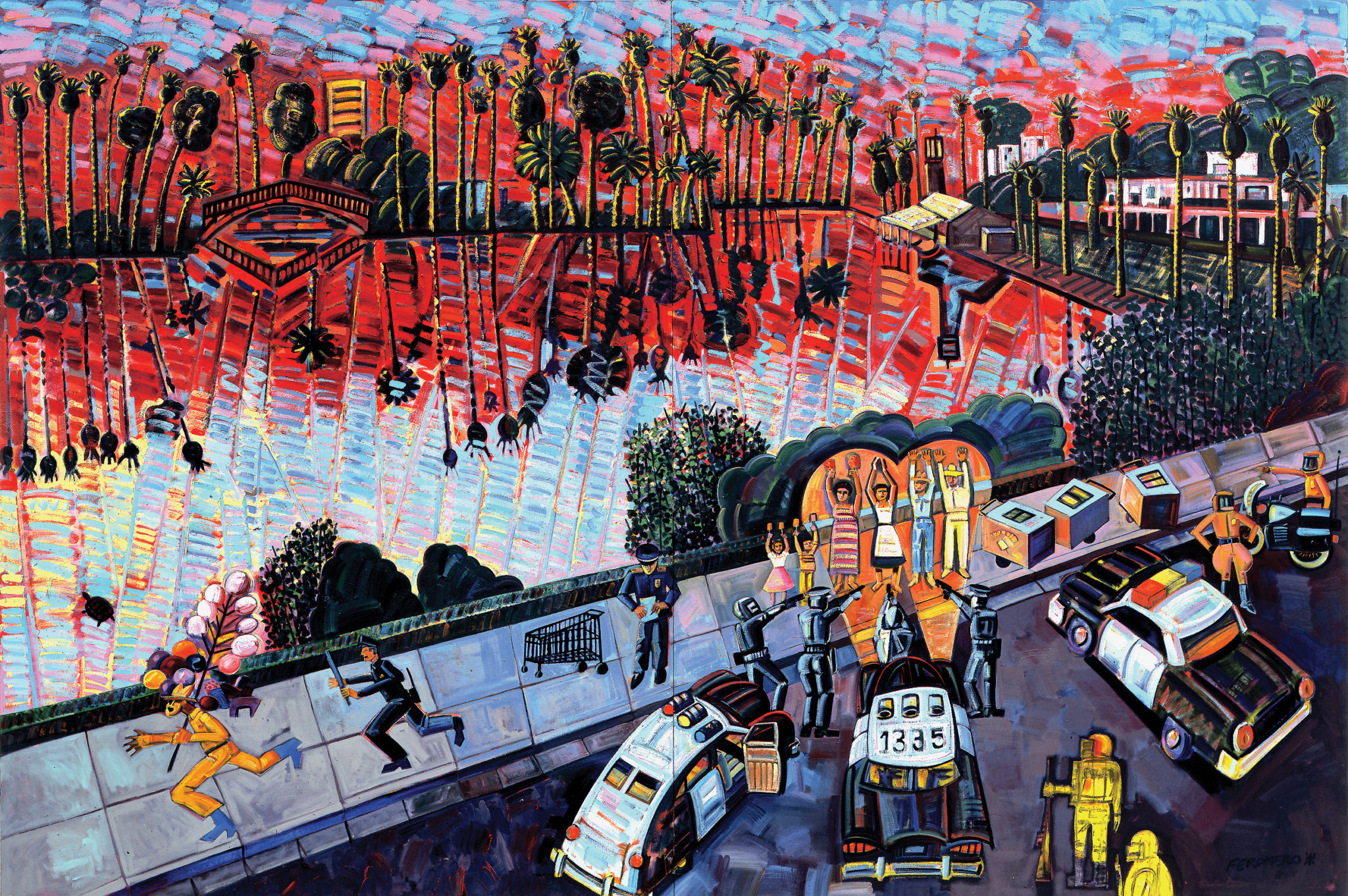 The Arrest Of The Paleteros

Romero is a painter of urban realities and the car is central both to Los Angeles (El Lay) and to the Mexican-American community with their love of the low-rider vehicles. Romero has said, “I lived in Boyle Heights overlooking downtown when I was a kid…We had this ’55 Ford Esquire with a white body, wood sides and a red vinyl interior…We drove everywhere.” This sense of both nostalgia and homage is everywhere in Romero’s work.

In the jaunty mixed-media wall piece entitled “Cityscape” (1991, oil on wood with neon, 36”x 60” x 8”), the ubiquitous car, which could easily be Romero’s alter ego, appears in front of chunky and very specific buildings. The time is perhaps that magic hour right before sunset, with a scumbled orange sky, buildings turning blue and green as the light deepens. Between the street and the cars is a glowing mystical violet light, and the whole piece is reminiscent of Red Grooms mixed-media sculptures.

While both endearing and charming, but Romero also documents the car as it relates to a more deadly gang activity. “Freeway Wars” (1987 oil on canvas 63 ½” x 75”) depicts gang members shooting at each other from a bird’s eye view. Though harrowing, Romero’s candy-colored palette and festive paint handling lighten the jolt of the image.

The focus of many later paintings (2003-2016) became the curvilinear, four-leaf clover concrete freeway itself—sometimes devoid of cars as seen from the sky with a skewed slightly Cubistic perspective. Romero spends half of the year near Provence, France and perhaps now views the “El Lay” road through different eyes, as though influenced by Matisses’s hard-edged, late in life cut-out abstractions.

“Freeway Blue on Blue” (2008, oil on canvas, 28” x 35”) is a graphic representation of the highway as a ribbon of light grayed blue, wafting lightly on the flat unmodulated picture plane. With a nod to Monet’s serial imagery, he paints several versions of this composition with lush two-toned colors. Though aesthetically pleasing, these paintings are lackluster and curiously flat when compared to earlier work. Romero is at his best when orchestrating a complex narrative, filled with animated animals and people and painted in his trademark exuberant style. My one caveat about this exhibit would be that Romero’s largest paintings and murals deserve to be seen almost by themselves – not surrounded by scores of painting, drawings, prints and sculptures. Paintings like the monumental “LA River Mural” (2005, acrylic on canvas, 120” x 552”) and the “History of Chicano Movimiento” (1999, acrylic on canvas triptych, 80” x 252”) deserve a room of their own so that the viewer can absorb and appreciate their complexities.

“Dreamland” is the first solo exhibition of a Chicano artist at MOLAA; it is also the very first time the entire museum has been dedicated to a single artist. The exhibition includes sketches from Romero’s childhood in the early fifties to his most recent 2016 paintings.

Nancy Kay Turner is an artist, arts writer and educator who has written for ARTWEEK, ARTSCENE and Visions Magazine. She fled NewYork for the sun and fun of California and has never looked back.