at Autry Museum of the American West, Los Angeles (through January 5, 2020)
Reviewed by Genie Davis

I looked a coyote right in the face
On the road to Baljennie near my old hometown
He went running thru the whisker wheat
Chasing some prize down
And a hawk was playing with him
Coyote was jumping straight up and making passes
He had those same eyes just like yours
Under your dark glasses
……………………………………….– Joni Mitchell, “Coyote”

Joni Mitchell’s song, “Coyote,” about a lover she describes as a shape-shifting trickster, seems a fitting soundtrack to the Autry Museum of the American West’s Coyote Leaves the Res: The Art of Harry Fonseca. The beautiful exhibition is the inaugural presentation of Fonseca’s work taken from the museum’s acquisition of the artist’s vast estate. In it, viewers meet an evolving humanization of the artist’s character of Coyote, an elusive figure who could very well have slipped into Mitchell’s heart and music.

The vibrant, uniquely-Fonseca exhibition includes paintings, sketches, and lithographs primarily depicting Coyote, a trickster and storyteller who can move between different worlds. Coyote in part represents Fonseca himself and the different roles he inhabits culturally, from his mixed heritage of Nisenan Maidu, Hawaiian, and Portuguese, to navigating the world of art and life as a gay man.

While shaping his own story, Fonseca essentially reshaped the worldview of Native art using contemporary techniques and traditional imagery, bright primary colors and rich storytelling. He takes the viewer on a journey that is at once personal and stereotype-defying, reconstructing what constitutes “Native American art,” subverting, reimagining and expanding on it.

Appearing in a wide range of non-traditional settings, Fonseca’s Coyote is also the artist’s anthropomorphic doppelganger, as he recasts his central character in the role of navigating the modern world and sharing in the artist’s own journey of self-realization and discovery. Moving with alacrity between worlds, the trickster coyote in Fonseca’s art, like the artist himself, fluidly moves between expectations and identities, traditional roles and familiar urban life.

Leaving the “res” – or Native American reservation lands – can be seen as a metaphor for personal growth, for stepping outside the expected, for entering previously unchartered territory in which an ordinary man might falter or hesitate: but not Fonseca’s bold Coyote. Cultural boundaries and self-imposed restrictions, what it means to be a part of Native American culture, what it means to be an outsider, an observer, to be gay, and to be intrinsically bound to one’s heritage — all these elements play a part in Fonseca’s Coyote story.

The late artist was California-born and grew up in a post-World War II culture. He was deeply involved in the Native American community, in part through the influence of his uncle, a Konkow Maidu elder. His Maidu heritage is evoked in imagery that includes references to petroglyphs, weavings, and basket design. His work is both folk and contemporary, traditional and pop art. From bold patterns to a vivid palette, the chronological exhibition reveals Coyote’s playful figure, but it also speaks to a darker cultural commentary. Both the character and the artist are transformational in their depiction of Native American tropes and modern Southwest style.

In Fonseca’s work, Coyote transitions from a familiar four-legged animal figure to one less bound by convention, walking upright, clad in leather jackets, attending dances, playing in a casino, and spending time with his female coyote companion, Rose. There are also works that depict Western clichés and comment on the genocide perpetrated by the mission system on Native Americans.

As genuinely playful, bright, and fun as many of the works are, contained within others is something darker and deeper, the horrors of the past, the joy and sorrow of Fonseca’s heritage and personal experience. The trick this Coyote has pulled off is a delicious one, exposing and revoking the restrictions of history and traditional stereotypes; peeling away the veneer of sanctity attributed to the mission system.

The exhibition at the Autry is shown in four sections: early works, including sketches and traditional images, and an exploration of Fonseca’s personal identity are presented in two sections; while the major focus of the exhibit, the variety of roles played by Coyote, fills a third. It is here that many of the works offer an incisive, pointed, and somewhat satirical commentary on both Native American stereotypes and American culture. There is also a fourth section, presenting  images of “St. Francis and the Fantastic,” a section that includes darker images drawn from the artist’s research into the history of the Maidu. 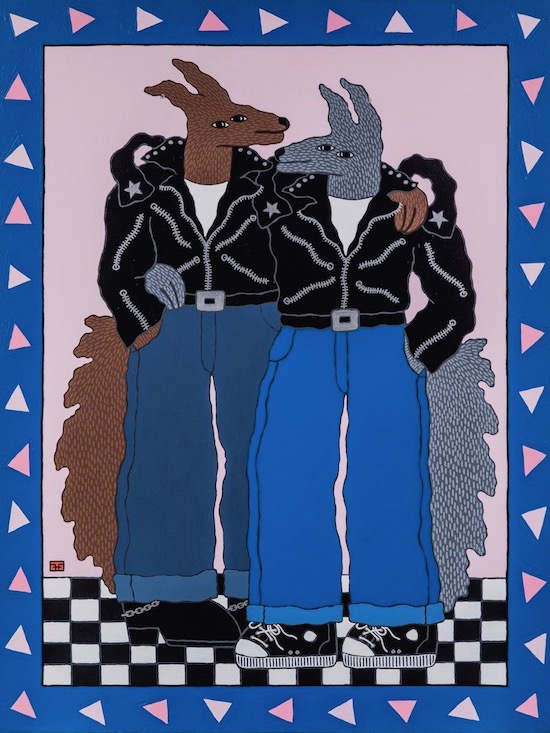 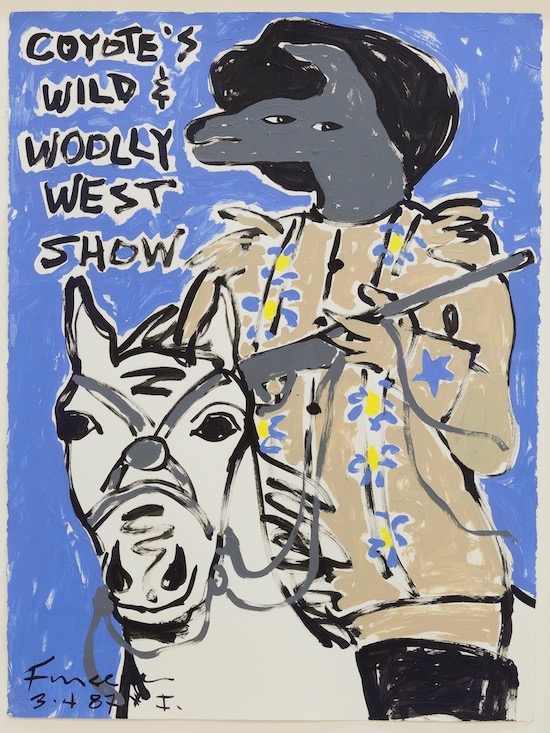 There are many stand-out works here as Coyote shifts his shape along with our perceptions throughout the exhibition. An untitled 1979 lithograph gives viewers a coyote as Native American dancer, dancing with sticks and clad in a skirt of leaves; he is an outgrowth of a traditional image.

A work from the mid-80s seems like a transition for Coyote’s lifestyle. In Wild & Wooly West Show #1, Coyote is both animal and human figure, astride a horse in Native American attire, toting a rifle, his eyes aslant on the same side of his face, watching our reaction to his performance, to his illusion.

Fonseca’s depiction of Coyote in the 90s primarily gives us a figure not just upright but clothed in leather and jeans with high-topped sneakers. There are some exceptions: a 1994 painting, Coyote on the Streets shows the character still on all-fours, unclothed and on the prowl, seemingly in search of a new city life, positioned in front of a graffiti-marked brick wall.

Coyote comes out as gay in the jubilant comradery of Wide Eyed and Bushy Tailed #1. Both its framework – bright blue with pink and white triangular shapes — as well as its black and white checkerboard floor, evoke Native American weavings. The two central coyote figures, arms around each other’s shoulders, represent an easy acceptance, even an innocence.

In his mixed media American Dream Machine (see slideshow below), Coyote dances amid a profusion of falling coins, beneath an arched banner of the title. A star pattern frames the piece; Coyote dances on another checkerboard floor; the American flag, bisected into four parts, intentionally reminds the viewer of images on a slot machine. One could easily infer from viewing this painting that regardless of heritage or sexuality, our only true culture is a commodity. But there are still cultural joys to be had: Coyote and Rose perform on stage as Mimi and Rodolfo in La Boheme and in Carmen; and in Untitled (Rose in a red dress), a sassy, spirited Rose jauntily fills the canvas, clad in red short-cut dress and red shit-kicking boots. She is powerful, large, a woman not to be messed with but no less a pleasure to be with.

In the Silence of Dusk They Began to Shed Their Skins, 1995.

In the “St. Francis and the Fantastic” section of the exhibition, images are darker and more haunting. Exploring his heritage, Fonseca reveals our own: the greed of the mission system, its empire-founding and gold-seeking; the obliteration of a people. Backgrounds of black and gold, crosses dipped in blood-red are both beautiful and shocking, up-ending the traditional teachings of mission “saints” with the true story of brutal genocide.

An image of St. Francis of Assisi #X is a dark, shadowy silhouette surrounded by a fluttering blur of birds. The image is not a familiarly comfortable one, despite its easily recognizable iconography; we are drawn intimately into a confrontation with a spiritually void image.

A somewhat sorrowful yet redemptive spirit moves through In the Silence of Dusk They Began to Shed Their Skins. A white figure and a black figure, both dotted with white paint, appear to be cocooned, waiting to emerge from their captivity. Powerful Native American symbols serve as background – red and white snakes, crosses, circles, and handprints which remind the viewer of the patterns on pottery and in weavings as well as those on petroglyphs.

In a way, the entire exhibition is about emergence: from constraints, from the past, from expectations. Powerful and accessible, Fonseca’s works are at once iconic and entirely fresh.

Genie Davis is a multi-published novelist, journalist, and produced screen and television writer based in Los Angeles. Publisher and writer of www.diversionsLA.com, she also writes for a wide range of magazines and newspapers.